Bal de Bath 2010
Devon based Poisson Rouge is a five piece band made up of
Louise Scammell: Melodeon/Bombarde/Oboe,
Sarah Mitchel: Violin,
Liz Nabb: Biniou/Violin,
Phil Wilson: Guitar/Cittern and
Martin Henning: Bass Guitar/Double Bass/Mandola.
The music Poisson Rouge play is French and Breton inspired dance music both original and traditional.
Poisson Rouge as a group was formed from musicians meeting at the long established Exeter based French/Breton dance club, ‘d’Accord’, which now meets on the 3rd Friday monthly in the Village Hall at Ide, near Exeter The band also play monthly and at Palstone Park, South Brent Bal Folk on the 1st Friday of each month.
Poisson Rouge have been performing for public and private events for about 6 years and amongst other events has performed at the last 4 Sidmouth Folk Weeks, Pentrefest Festival and Bal de Bath 2010.
3 years they ago joined forces with Cornish band Dalla to put on a joint Breton and Cornish dance evening. This proved successful enough for both bands to join up again at the Sidmouth Folk Week in 2009 for a similar event.
French and Breton dance is a mixture or lively circle and set dances such as Bourees and An Dros and more romantic couple dances such as Mazurkas, Waltzes and Schottiches and is tremendous fun. The music ranges from the hypnotic to the raucous – the band breaking down into smaller groups and solo spots to add variety to the sound - with beautiful and unusual melodies that will leave you gasping!
D’Accord have an additional member, Carrie Atkinson who is a dance teacher, who leads workshops in Breton and French traditional dance and can lead the dances at a Bal or Fest Noz when required.
Links
http://www.rootsandshootsdevon.blogspot.com/
http://www.d-acordinexeter.blogspot.com/
http://www.phonic.fm/
Contact the band at poissonrougeband@btinternet.com and m.henning@talk21.com for booking availability and latest performances.
Gallery: 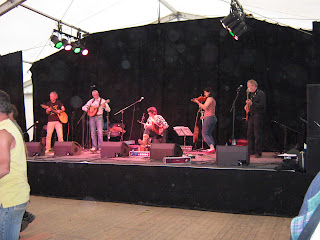 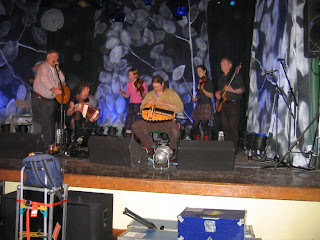